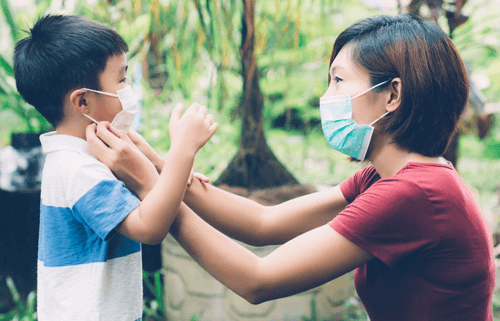 A Zoom Retirement Party for My Sister, Lauri

I grew up as an older kid in a family of nine children. I was 11 years old when Lauri was born, and I doted on her from the time she came home from the hospital. In a large family, older kids help care for younger kids. Our mother often joked, “Lauri thinks you are her mother.”

I enjoyed being Lauri’s older sister, and over the years we grew increasingly close. When I got married, Lauri made the wedding cake. When she got married, I was her maid of honor. I became a teacher, and so did she. We shared support and stories. Over the years we celebrated numerous family milestones and countless Sunday dinners, keeping our families close as our children grew.

We now live in different states, and Lauri would be retiring this year. Under normal circumstances I would go to California and celebrate. However, having a party while social distancing seemed tricky. We are a family of parties, huggers, and kissers. During this time of social distancing, I knew we would forget the spacing rules, especially after a drink or two. So, I suggested a Zoom party, and everyone was on board. Showing Lauri our love, without the richness human touch conveys, could be tricky. But I knew my siblings and I would give it our best effort to make it warm and significant.

We discussed each of us making a sign congratulating and wishing her well to display on the screen when she joined us. We talked about singing a song, but as a group we are unable to successfully carry a tune, even a simple happy birthday song. I’m not sure why, but it never turns out well — people finishing at different times, not staying on key, and even shouting. After all, shouting is common in a large family, as siblings compete to be heard. I worried about everyone talking at once, resulting in Zoom chaos. But I knew I could use the mute button if necessary!

I considered going over Zoom etiquette with everyone, suggesting such things as talking one at a time, letting the person speaking finish before talking, and so on. But I didn’t want to sound like the bossy big sister, and I knew no one would pay attention. Another suggestion included having a meal, and maybe balloons delivered anyway! It was fun to watch the planning unfold.

Several of my sisters didn’t know Zoom and needed instructions, so we made plans for a practice session before the party. We also decided to have a glass of our favorite beverage near our computers for when it was time to toast.

On the Friday before Saturday’s Zoom party, we had the practice run. I wasn’t sure we were all going to get connected, but my husband Dan accepted the challenge. Step- by- step, he walked three siblings through the process. Several hours and many laughs later, they were on. They practiced again the next morning, before the actual party. Eventually everyone was ready.

The celebration proved to be lively! First, we simply spent time looking at each other — mostly just surprised that that we had succeeded! Then the party began. We blew party horns, held our congratulation posters up to the screens, and toasted Lauri. Then we each told a story about her teaching years. We took turns, and no one talked over or interrupted anyone. I didn’t even need to use the mute button!

I told a story about how while teaching reading to ESL students, a 4th grade transfer student commented on the first day, “You remind me of my favorite teacher at my other school.”

I smiled and asked, “What school?”

She named the school where my sister taught. “What are the chances?” I thought. I had to ask, “What is her name?”

After sharing stories, we talked about the current situation with Covid-19 and how we hoped to get together soon, after a vaccine was available.

Suddenly a notice appeared on our computers, notifying us that we had five minutes left. We agreed to Zoom again in a few weeks and gave each other virtual hugs and kisses. Before signing off, we sang, “Happy Retirement to You!” Yes, it was off key and out of sync, but it was fun, and fun is what we were going for. The Zoom party united us and gave us a way to show our love—for Lauri, and for each other.