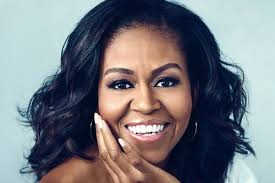 Visitors to this website submit their responses to the Monthly Challenge.  Here are the responses so far:

I found Michelle Obama’s book Becoming as exceptional as she is. Her life story is a model of determination and perseverance, encouraged by parents whose example of how to live productive, caring lives served as Michelle’s inspiration. Her description of the small apartment where she grew up in South Chicago reminded me of my beginnings in housing that would be considered less than middle class. It didn’t matter because I, too, had loving supportive parents. The comparison stops there. Michelle carved a path that was focused and purposeful, while mine wove through many trial and error back roads.

I was so taken by Michelle’s book that I will be attending her presentation in Vancouver, B.C., on March 21st. I’m anxious to hear her in person. Here is a woman who had a successful career and put it on the back burner because she knew Barack was the kind of President the country needed. She also knew she had to protect her daughters as best she could from public scrutiny. By doing so, she became an incredible and perhaps the best First Lady this country has ever known. And now, with her daughters nearly grown, she has another opportunity to continue making a difference in the lives of many. Seeing Michelle Obama in Vancouver, B.C. on March 21st will be one of the highlights of my life.

Debra Valpey of Normandy Park, Washington, wrote the following description of being absorbed in fantasy and play as a child:

It Was All About Horses

It was always about horses. Horse—that divinely inspired creation of elegance, romance, and power. I was one of those horse-crazed pre-adolescent pitiful lost female souls who knew that living with a horse would make it all well. I would be smarter, happier, and prettier if only I had a horse to love. Freudians make of it what you will, I just knew it was my destiny

Every story, drawing, or math problem in school eventually became focused around a horse, or a group of horses. I even tried writing a novel about a horse, which I typed on a 1941 portable typewriter in my front yard, but, alas, I ran out of steam. A novel takes a long time to write! So, instead, I watched “National Velvet” over and over. I wanted to be Elizabeth Taylor. I even tried changing my name to Martha so my name would sound more beautiful like Elizabeth. I collected porcelain models of horses, gave them all names, and conducted good night rituals with them before I went to bed.

Then, one day, I created a horse of my own to ride. I used two-by-fours for the body, and then draped, stuffed, fluffed, and tacked fabric to the boards to resemble horse flesh. And I made a saddle, of sorts. Anticipating some serious racing, I built my horse’s legs with cast-off nylon stockings stuffed with cotton. For “horse power,” I structured a harness for my stud (of course he was a boy!) and even set out a circuit of jumps across my back yard. We were off to the races! There’s even a 16 mm movie of all this somewhere. I can’t tell you where because then I would have to kill you. It was that bad. Imagine the nylon legs flailing this way and that while I crazily raced around my yard!

Flash forward a few years and I actually bought my own little “bad boy” for which I had saved my quarters and babysitting money. He was the offspring of my pediatrician’s daughters’ horse who lived just a couple of miles away. He cost $50, and that was years of savings back in 1964. His name was Shadowfox and he was glorious — shiny black with a white star on his forehead. I visited him every day to chase mice from his feed bin and haul boiling water from the neighbor’s house to crack his frozen water trough. I never got to ride him because he was just a babe (that’s all I could afford), but I hugged him, leaned my tall scrawny body across his back, and talked to him about everything. Alas, he was not, as expected, the cure for my miserable life, but that chapter will have to wait for another tale. Here is a tease, though: my parents got divorced, my mother wanted to return to Seattle (from Kansas), there was a con man, a local sheriff who took a shine to my “grass-widowed” mother, and a chicken coop.

Awaiting your entries for the current challenge!