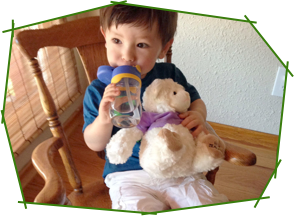 Below you can read a couple of “Poignant Moments” essays by yours truly, as well as one by Mieke Tazelaar.  After reading these, we hope you will send in  descriptions of one or two poignant moments in your life. These could be about highly significant events. Or, they could be about something as simple as a conversation at the grocery store.

We’ll begin with a recent anecdote from my own life. Maybe not a poignant moment, but certainly one I’d like to remember and cherish!

I tried valiantly to brush up on my Spanish before our long-awaited trip to Cuba. I never reached the level of fluency I had hoped for, but my Spanish did serve me on a few occasions during our weeklong trip. Here’s one example.

We were in the rustic town of Trinidad, following our guide over buckling cobblestone streets while enjoying the balmy breezes of this January morning excursion. After pointing out a few of the oldest churches and other buildings, our guide gave us an hour of free time to explore the city on our own.

My husband and I soon found ourselves on a short street lined with makeshift, open-air stalls from which locals sold hand crafts –- little toy wooden cars, embroidered napkins and purses, hand- stamped leather wallets, and so forth.

One stall sold cotton shirts, mostly for men. Knowing how much John had enjoyed shirts like this that he had bought in years past on the beaches of Mexico, I urged him to take a look. “I already have a couple of those,” he protested.

“Yes, but just think,” I said, “You could tell people you got your shirt in Cuba!”

“I could already say that about one of the shirts I already have,” he said; John will do or say almost anything to avoid shopping.

I pointed to one and said, “Look at this one!”

The proprietor, a Cuban woman, took the shirt from the rack and held it out to John with a big smile, saying something in Spanish.

Now, John was more or less trapped, and he reluctantly pulled the shirt on over his T-shirt. “Too small,” he said, crossing his arms over his chest. We could see that the fabric was tight over his shoulders. John appeared relieved that he had an excuse not to continue shopping.

Using a combination of Spanish and gestures, the woman conveyed that it would fit fine if it wasn’t over his other shirt.

“Take off your own shirt,” the woman and I both said in our respective languages.

“No,” John smiled, “I really don’t need another shirt.” He was pulling the too-small shirt back over his head. But his own T-shirt was going along for the ride!

“Ah! Go ahead and take it off,” the woman and I said enthusiastically, warming up to the task at hand.

It seemed John had no choice as the two shirts were coming off in tandem.

I laughed and said, “Si, muy guapo. Pero es mio!” She got the joke immediately, and we both laughed heartily, our eyes linking.

John looked puzzled, so I let him in on the joke: “She said you’re very handsome, and I agreed but told her you’re mine!”

We were all laughing now, and I realized I had probably just made my first joke in a language other than English!

She insisted that he try on a larger shirt, and he complied. It was a perfect fit, and he consented to let me buy it for him.

The woman quickly wrapped it up. As she handed it to me, she said, “Bueno. Aqui esta. Le gusta bien a su esposo.” [I may have the Spanish wrong here, but basically I could understand that she was saying the shirt looked good on him.] Then, with a twinkle in her eye, she added, “Pero el es el suyo!” But, he’s yours!

At the bottom of my fragrant handkerchief box lies the Yankee hankie. I keep it under a lavender sachet, and now and then, I spy a corner of the folded memory that takes me back to the ocean voyage and to Annalies.

My family boarded the Talisse in Rotterdam during the winter of 1946 and landed in Hoboken, New Jersey, twelve days later. All over the post World War II world, large luxury liners lay idle in harbors, but our small ship, a converted cattle boat, made many crossings during that time.

The women’s quarters were in the hold, where Mother and I slept in bunk beds, my mother on the bottom bunk, I in the middle, and a woman who tossed and turned all night on squeaky springs, on the top. My mother was so sick the entire crossing that she could not leave her bed, much as she longed to escape the smell of diesel oil.

I stood by her side, putting cool damp cloths on her forehead. I felt helpless and confused. During the war, her bravery and cheerfulness had held our family together, but this gaunt, ashen-faced woman seemed like a stranger to me. With a weak whisper, she urged me to get out of the room and find the fresh air she so craved herself.

I missed my grandparents and Dutch friends. In my new country, my father’s family waited for us in Saugatuck, Michigan, and I would make new friends, but for now, I felt lonely, frightened, and homesick.

I clung to my father and brothers, as we played cards and read to each other. On calm, dry days, we walked on deck or sat on a bench and watched the wake behind the ship.

I struggled with my long, unruly hair. Mother’s practiced hands always braided it neatly each day, but now I tried it myself, with pitiful results. Father was no better, and we were about to give up when we met Annalies.

Annalies and Friso, a friendly, vivacious couple, were on route to Buenos Aires. They would meet their south-bound ship in New York and begin their post-war lives anew in Argentina.

Annalies spied our pathetic attempt to tame my tresses and offered to help. Mother had washed my hair with soap for years, which coated it with a dull film no matter how well we rinsed it, and combing the tangles out of my air-dried hair was frustrating and painful.

Annalies possessed a precious bottle of shampoo, and she washed my thick auburn hair in a basin with warm water borrowed from the galley. Then rinsed it in cold. I shivered, but this was an inevitable step, and I put up with it. We later sat near the boiler of the ship until my hair dried, and the comb-out was a little less awful than usual. She French-braided the sides, then carefully wove two neat plaits, tying the ends with string and plaid ribbons.

I was proud of my clean, shiny mane, and Annalies and I became fast friends. She was my safe haven for the rest of the trip, and for her, I replaced the little sister who had died during the war.

When we approached the New York harbor, she gave me a striped cotton handkerchief – red, white, blue — “like the American flag,” she told me.

“Or like the Dutch flag,” I said, remembering the three stripes on the flag of Holland.

“It’s your connection to both countries, a Yankee hankie!”

I laughed at the sound of the words, and she explained the meaning.

Annalies pulled another out of her pocket. “I’ll keep this twin, and every time I see it, I will think of you.”

“So will I,” I said, feeling sad. Soon, we would part, but she had our Saugatuck address and promised to write.

Once we reached the harbor, my mother was well enough to join us aboard, and she thanked Annalies for all her help. We left the ship together and were herded into a waiting room in Hoboken. I clutched my Yankee hankie. Annalies held hers.

Finally, Annalies and Friso were called. They gave us warm tearful hugs, and, picking up their bags, they walked toward the door and out of my life. One last time, she turned around, and with a sad smile, she waved her Yankee hankie. And I, of course, waved mine.

A few months later, I received a card from Annalies, but she did not include her address. We never heard from her again. Father had told me not to be disappointed. He understood that we had fulfilled a temporary need for each other, and it was time for both of us to move on. But in Saugatuck, in my room at my grandmother’s house, I kept the memory of my friend in a dresser drawer. It has traveled with me through many moves and phases of my life, and whenever I come across my Yankee hankie, I think of Annalies, my anchor in a time that I was lonely and adrift between two countries.

And I’d like to think that, every so often, somewhere in Argentina, a gray-haired woman comes across a red, white and blue handkerchief – and remembers.

A few days ago, I phoned an old friend who has recently moved into assisted living. Her husband had recently had a stroke, and then she, my friend, had a bad fall resulting in a concussion. The concussion caused mild amnesia and some mental confusion. Although she (let’s call her Shelli) is well on the way to recovery, it takes her awhile to remember events. It is a gradual unfolding and reconstructing of memory.

So, I was delighted when she began telling me about a family vacation she organized about 20 years ago when her two daughters were young adults. They had gone to Yellowstone Park at the very end of the cross-country ski season; they had heard this was the least-crowded time to ski. The family of four, plus the two ‘significant others’ of her daughters, went on this trip. They lucked into beautiful weather. Over and over, she used the sentence, “It was just exquisite.” I was so glad I had phoned Shelli. I hope it brightened her day. As for me, it was fun for me to imagine what an “exquisite” day looks like in the snowy beauty of Yellowstone Park. 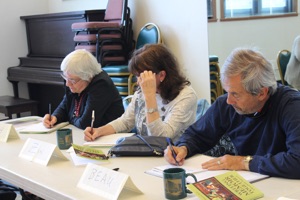 Writing with others can take the stress out of writing and help make the words flow.

Click on the mailbox, below, to submit YOUR writing:

Awaiting your entries for the Current Challenge!